How to launch a food delivery app in a week, thrive as a startup founder, and pronounce the CEO’s name 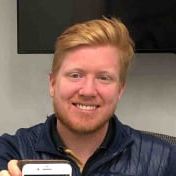 How do you describe what TopServe does?

HyperTrack’s founder was in that industry.

So, I looked him up and I was, like, Holy frig, that’s basically what we’re doing. I’ve only met Kashyap... is that how you pronounce his name?

He’s got this dad joke about how he goes well with everything.

What brought you to HyperTrack?

A couple years ago, I was working on a product that was kind of like pay-at-the-table with your phone. We launched a beta test and it went terribly. Nobody used it. (laughing)

However, as the company started, we saw the big players and we said, “We might as well do delivery and takeout, as well.” Because then, once our foot’s in the door, it’d be easier to say, “Hey, we also offer reservations, and at the same time, while we’re at it, how about you use our pay-at-the-table system?”

So we did the delivery thing, but we needed to keep up with the competition, so we needed the ability to show customers how to track their driver, and that’s where HyperTrack came in.

We just implemented it

How did you find HyperTrack?

Googling SDKs—“track drivers”—and you guys showed up. So we just implemented it.

How long did it take from start to production?

What’s really useful is your sample. We took your sample GitHub project and just modified it so that we use our credentials for our login. We use our REST API and your project. That worked really well.

And now your customers see their delivery on a live map.

That’s looking good. I really like how you record all the trips so I can go back in time and bring up the trips, see when it started and when it ended. If customers call and say, “Hey, my delivery was late,” we can go back to the HyperTrack software and say, Okay, the driver picked it up at 8:00. It took him 45 minutes when it should have taken him 15. Where’d he go?

HyperTrack’s been working great, and we got it up and running quickly

Thank you for not being creepy.

All good. All good.

Like I said, HyperTrack’s been working great, and we got it up and running quickly, so, we’re super pleased. To my knowledge, there’s nobody competing with you guys with a good product like this. You likely know of some people, but I don’t.

If you hadn’t found us, or if we disappeared, what would you use?

So, a ways down the road, we have to redo our driver app—in, I’d say, maybe two and a half weeks…

I just love startup time. “It’s a ways down the road. Two, maybe two and a half weeks from now….”

What about further down the road? Are we in a COVID blip before everybody starts going out again?

People were already turning to fast delivery and getting everything instantly. Companies were going to do this anyway. COVID just accelerated it.

So, we have a lot in the works. In the startup world, you’ve got way too much stuff in the works. Just keep improving each one, little amounts at a time, and, hopefully, pray that someday they all come together.

The big vision, what we’re trying to do, we’re really trying to become a platform where, if you’re doing anything with food, you go on TopServe and you do your thing.

That’s what we’re trying to become. Slowly, but hopefully surely.

“Slowly”? How old is this company, again?

There’s still lots to do, but if this month’s better than last month, and next month is better than that, then I’ll keep doing that for as long as I can.

Now, it’s easier than ever to launch and run an on-demand commerce operation with the sophistication of the Bat Cave.

HyperTrack Blog: Imagine. Build. Repeat.
—
“We just implemented it.” Our Q&A with TopServe
Share this